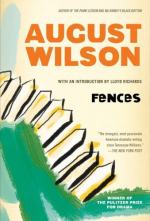 Fences - Research Article from Literature and Its Times

August Wilson
This encyclopedia article consists of approximately 14 pages of information about Fences.

August Wilson was born in Pittsburgh's Hill district in 1945 to a black mother and a white father. The boy grew up in poverty in Pittsburgh, receiving a positive racial identity from his mother, a strong-willed woman who knew how to stretch the family's meager resources. Initially a writer of poetry and fiction, Wilson had already succeeded with the play Ma Rainey's Black Bottom (1984) when Fences opened in 1985. This later play, focusing on a poor black urban family, especially on its father, won the Pulitzer Prize as well as four Tony awards, including one for best play.

Black Pittsburgh neighborhoods. Fences recreates the living conditions of poor Northern blacks around 1918, when its main character, Troy Maxson, migrated to the North. The play itself takes place in 1957-58 and 1965, and is set in what the show's director...

More summaries and resources for teaching or studying Fences.

Fences from Gale. ©2008 Thomson Gale, a part of the Thomson Corporation. All rights reserved.