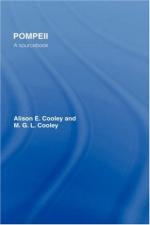 This encyclopedia article consists of approximately 6 pages of information about Excavations at Pompeii and Herculaneum Mark the First Systematic Study in Archeology.

When Mount Vesuvius erupted in August of A.D. 79, it destroyed Herculaneum and Pompeii, two lively, bustling Roman cities. The eruption also had the effect of perfectly preserving that moment of tragedy, the daily routines of life in classical Italy, and the structure and art of those ancient cities. Directed by King Charles III of Naples, the initial excavations of Pompeii and Herculaneum in the eighteenth century were the first large-scale archaeological projects in history. The revolutionary methods used during the excavation unearthed enormous historical, architectural, and artistic treasures and formed the basis of the meticulous approach used in today's archaeological techniques.

The volcanic mountain of Vesuvius rises 4,190 feet (1,277 m) above a fertile valley near the Bay of Naples, once home to a bustling...

More summaries and resources for teaching or studying Excavations at Pompeii and Herculaneum Mark the First Systematic Study in Archeology.

Excavations at Pompeii and Herculaneum Mark the First Systematic Study in Archeology from Gale. ©2005-2006 Thomson Gale, a part of the Thomson Corporation. All rights reserved.