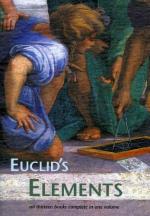 This encyclopedia article consists of approximately 5 pages of information about Euclid and His Contributions.

Euclid was an ancient Greek mathematician from Alexandria who is best known for his major work, Elements. Although little is known about Euclid the man, he taught in a school that he founded in Alexandria, Egypt, around 300 B.C.E.

For his major study, Elements, Euclid collected the work of many mathematicians who preceded him. Among these were Hippocrates of Chios, Theudius, Theaetetus, and Eudoxus. Euclid's vital contribution was to gather, compile, organize, and rework the mathematical concepts of his predecessors into a consistent whole, later to become known as Euclidean geometry.

In Euclid's method, deductions are made from premises or axioms. This deductive method, as modified by Aristotle, was the sole procedure used for demonstrating scientific certitude ("truth") until the seventeenth century.

At the time of its introduction, Elements was the most comprehensive and logically rigorous examination of the basic principles...

More summaries and resources for teaching or studying Euclid and His Contributions.

Euclid and His Contributions from Macmillan. Copyright © 2001-2006 by Macmillan Reference USA, an imprint of the Gale Group. All rights reserved.