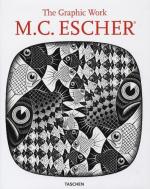 This encyclopedia article consists of approximately 2 pages of information about Escher, M. C..

Maurits Cornelis Escher was born in Leeuwarden, Holland, in 1898. He enrolled in the School for Architecture and Decorative Arts in Haarlem because his father, a civil engineer, wanted him to become an architect. Escher, however, left school in 1922 to pursue his interest in art. He married in 1924 and moved to Rome where he lived until 1934. Growing political tension in Europe caused him to move his family first to Switzerland, then to Belgium, and finally back to the Netherlands in 1941. He remained there until his death in 1972.

M. C. Escher's lithographs and woodcuts of geometric distortions and mathematical impossibilities made him famous throughout the world.

Escher's art is of particular interest to mathematicians because, although he received no mathematical training beyond his early years, he used a variety of mathematical principles in unique and fascinating ways. Escher's artwork encompasses two broad areas: the geometry of space, and the so-called "logic" of space.

On a visit to the Alhambra in Spain, Escher was inspired by the colorful geometrical patterns of tiles. He began to explore the various ways of filling two-dimensional space with symmetrically repeated arrangements of images known as tessellations. In the process, he discovered the same principles that had been developed previously, unknown to Escher, within the branch of mathematics known as group theory. When mathematicians and scientists became aware of his work, they helped popularize his art, and he soon gained an international reputation.

Subsequent interactions with mathematicians introduced Escher to other mathematical concepts that he explored in his art. Among the results are his so-called impossible constructions that appear reasonable but prove to be impossible to construct in three-dimensional space. He also employed non-Euclidean geometry, representations of infinite space, and various aspects of topology.

Although Escher completed his final graphic work in 1969, the popularity of his images continues today. Several Internet sites are dedicated to providing information about Escher and selling renditions of his art.

Escher, M. C. from Macmillan. Copyright © 2001-2006 by Macmillan Reference USA, an imprint of the Gale Group. All rights reserved.