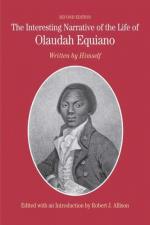 "The next day proved a day of greater sorrow than I had yet experienced; for my sister and I were then separated, while we lay clasped in each other's arms."

From The Interesting Narrative of the Life of Olaudah Equiano.

Olaudah Equiano (pronounced ek-wee-ANH-o; also known as Gustavus Vassa) led a remarkable life as a slave and freedman. The son of an African chief, he was captured at age eleven by African slave traders. After being sold to European traders, Equiano was sent first to the Caribbean. He was then transported to a plantation in Virginia, where he was bought by British naval officer Michael Henry Pascal. While serving Pascal, he received many advantages such as being taught how to read and write English. He...

More summaries and resources for teaching or studying Equiano, Olaudah.