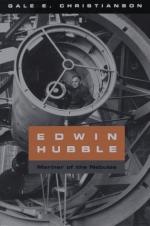 Edwin Powell Hubble - Research Article from Science and Its Times

This encyclopedia article consists of approximately 3 pages of information about Edwin Powell Hubble.

Edwin Hubble's contributions opened the way to modern cosmology, the study of the universe. He first realized that many of the nebulae, often seen only as faint fuzzy patches in the sky, were actually separate galaxies like our own Milky Way. He also discovered that the universe is expanding. This eventually led to the theory that it began in a massive explosion known as the Big Bang.

Hubble was born on November 20, 1889, in Marshfield, Missouri. As an undergraduate at the University of Chicago, he earned degrees in both mathematics and astronomy. Despite his interest in science, he had promised his dying father he would study law. He went to Oxford University as a Rhodes Scholar, graduating in 1912. Having found that legal work did not hold his interest, he dissolved his Kentucky practice soon after he established it. He did retain from...

Edwin Powell Hubble from Gale. ©2005-2006 Thomson Gale, a part of the Thomson Corporation. All rights reserved.