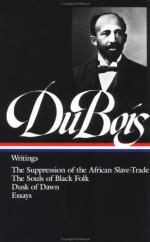 This encyclopedia article consists of approximately 12 pages of information about Du Bois, W.e.b..

W.E.B. Du Bois is considered the greatest African American intellectual and civil rights activist of the twentieth century. He was among the first to call for full and unconditional equal rights for people of color. A social scientist by education and training, Du Bois carefully documented the historical and social truths of black people's lives as well as the realities of the harsh conditions they endured. But he did not limit himself to social science, for he was also notable as a...