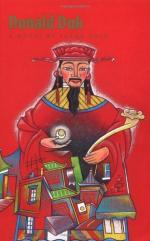 Donald Duk - Research Article from Literature and Its Times

This encyclopedia article consists of approximately 11 pages of information about Donald Duk.

Bom in Berkeley, California, in 1940, Frank Chin has been called the "conscience of Asian American writing" (Wand in Chan, p. 529). He is a critic, an essayist, a fiction writer, and a playwright. In Chin's view, much of traditional Chinese American literature has stereotyped the Chinese as timid and passive, and has departed from the truth of Chinese history and philosophy. His own writing aims to show Chinese culture in its "real" form, a form that attempts to break away from the stereotypes of the past.

San Francisco's Chinatown. Since its origins as a city, San Francisco has included a large Chinese community within its population. The original surge of Chinese immigration came as a result of numerous events in both China and the United States. In the 1840s, China's ruling Manchu dynasty was declining...

More summaries and resources for teaching or studying Donald Duk.

Donald Duk from Gale. ©2008 Thomson Gale, a part of the Thomson Corporation. All rights reserved.