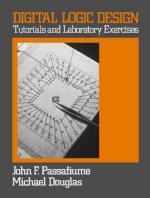 This encyclopedia article consists of approximately 6 pages of information about Digital Logic Design.

Computers, and other digital systems, are designed using elementary electronic circuits called gates. In this article, Inverters, Or gates, and And gates are introduced by logical statements justifying the term "logic design." Then, the design procedure is illustrated, and integrated circuits are discussed.

Gates are used to regulate electronic flow and to construct devices to process data, as well as to build memory devices. There are three fundamental gates—"And," "Or," and "Not"—as well as some "hybrid" gates such as "Nand" (Not-And) and "Nor" (Not-Or).

Consider the logical statement: "The porch light is on (Z 1) when I am not home (A 0)." Z is the output; A is the input (I am home). A corresponding binary function, of one variable, which is also binary, is called "Complement" or "Not." "Not" is represented by "Z ~A" and its behavior is:

Digital Logic Design from Macmillan. Copyright © 2001-2006 by Macmillan Reference USA, an imprint of the Gale Group. All rights reserved.