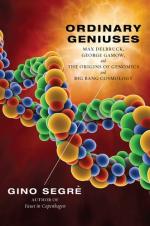 This encyclopedia article consists of approximately 2 pages of information about Delbr&#xfc;ck, Max.

Max Delbrück made major contributions to the understanding of replication and viral function. Raised in Berlin in a distinguished family of German intellectuals, Delbrück trained as a physicist with Niels Bohr and other leaders in the field of quantum mechanics. In the early 1930s his interests turned toward biology and the nature of the gene. This was only thirty years after the rediscovery of Mendel's work and twenty years before Watson and Francis Crick discovered the structure of DNA. With two colleagues, he published a theoretical paper on quantum mechanical restrictions on gene structure. These ideas were popularized by the physicist Erwin Schrödinger in the book What is Life?, which inspired many young midcentury scientists to join the quest to understand the gene.

More summaries and resources for teaching or studying Delbrck, Max.

Delbrück, Max from Macmillan. Copyright © 2001-2006 by Macmillan Reference USA, an imprint of the Gale Group. All rights reserved.