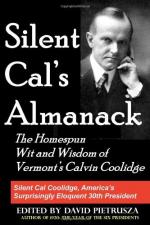 This encyclopedia article consists of approximately 11 pages of information about Coolidge, Calvin.

"The Press under a Free Government"
Published in 1925

One of the ideas most often associated with the 1920s is that "the business of America is business." These words, spoken by President Calvin Coolidge (1872–1933; served 1923–29) in a speech to newspaper editors, did indeed capture the pro-business spirit of this economically well-to-do decade. A closer look at this speech, however, reveals a more complex picture of Coolidge's ideas about his nation.

Coolidge climbed the political ladder slowly and steadily, reaching the presidency unexpectedly when President Warren G. Harding (1865–1923; served 1921–23) died in office before the end of his first term. Born in 1872 in Plymouth Notch, Vermont, Coolidge attended Amherst College and later established a law practice in Northampton, Massachusetts. He served as a city councilman and state legislator and eventually as governor of Massachusetts. In that position Coolidge gained national recognition and praise from the Republican Party for his...

More summaries and resources for teaching or studying Coolidge, Calvin.