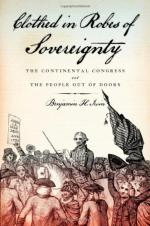 This encyclopedia article consists of approximately 8 pages of information about Continental Congress.

Excerpt from "Land Ordinance of 1785"

Issued on May 20, 1785, by the Continental Congress
Published in Documents of American History, edited by
Henry S. Commager, 1943

When Virginia completed the cession, or turning over, of its western land claims in 1784 (see first excerpt of this chapter), Congress knew it was only a matter of time before other states holding claims would do the same. Congress directed that a committee be formed to establish how western lands were to be divided and sold. The money from sale of the lands would be used to help pay off the national debt, which had accumulated during the American Revolution (1775–83). Virginian Thomas Jefferson (1743–1826) was appointed chairman of the committee for establishing a land policy. Jefferson had the foresight and scientific knowledge to create a practical western land policy.

The first issue the committee had to decide was...

More summaries and resources for teaching or studying Continental Congress: Land Ordinance of 1785.

Continental Congress: Land Ordinance of 1785 from UXL. ©2005-2006 by U•X•L. U•X•L is an imprint of Thomson Gale, a division of Thomson Learning, Inc. All rights reserved.