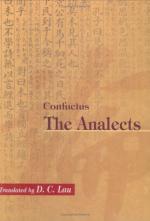 Confucius (K'ung Fu-Tzu) - Research Article from Science and Its Times

This encyclopedia article consists of approximately 2 pages of information about Confucius (K&#x0027;ung Fu-Tzu).

Confucius, the Latinized name of K'ung Fu-tzu (which means "Master K'ung"), was one of world's great philosophers and the inspiration for one of the world's great religions. Although he was apparently not directly responsible for any significant scientific breakthroughs, his philosophies and beliefs were important factors that helped to stir some of the early Chinese mathematical and scientific traditions.

Like so many ancient historical figures, very little is known of Confucius's youth other than that he was apparently born into a noble family in the China of the Chou dynasty. According to traditional stories, he quickly rose in the esteem of his superiors until, at the prompting of jealous counselors, his prince gradually turned against him. By the age of 40 he had embarked on the life of an itinerant philosopher and scholar, traveling from town...

Confucius (K'ung Fu-Tzu) from Gale. ©2005-2006 Thomson Gale, a part of the Thomson Corporation. All rights reserved.