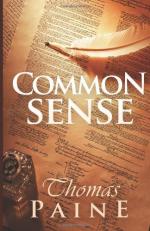 Common Sense - Research Article from Literature and Its Times

When Thomas Paine wrote Common Sense, he had been in America only slightly longer than a year. He arrived in Philadelphia in October 1774, a thirty-sevenyear- old tax collector and corset-maker from England who had just started to cultivate an interest in political writing a few years earlier. By the summer of 1776, Paine's Common Sense had sold a remarkable 150,000 copies throughout the colonies and had persuaded probably an even greater number of colonists that they must sever their political ties to Britain. The document that Thomas Jefferson and his fellow delegates signed on July 4, 1776, may have been the colonies' official declaration of independence, but Common Sense was the work that convinced America's "common" people that independence was their best-or, more exactly, their onlycourse of action.

Events in History at the Time of the Pamphlet

Common Sense from Gale. ©2008 Thomson Gale, a part of the Thomson Corporation. All rights reserved.