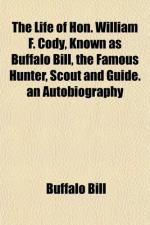 "Buffalo Bill was one of those men, steel-thewed and iron nerved, whose daring progress opened the great West to settlement and civilization.... He embodied those traits of courage, strength and self-reliant hardihood which are vital to the well-being of our nation."

Theodore Roosevelt, as quoted in Buffalo Bill: The Noblest Whiteskin

At the turn of the twentieth century, William F. Cody was known as "the greatest showman on the face of the earth," according to Nellie Snyder Yost in Buffalo Bill: His Family, Fame, Failures, and Fortunes. Growing up on the frontier, Cody loved the freedom and excitement of western life. But as more people settled the once "wild" West and as Indians...