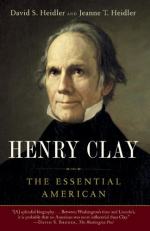 This encyclopedia article consists of approximately 11 pages of information about Clay, Henry.

Henry Clay, a Virginian by birth and a Kentuckian by choice, was a fearless fighter for the cause of liberty and for the strength of the Union. A brilliant public speaker, he also inspired the common man in his role as an elected official. Clay was a man of action who successfully moved important legislation through Congress. Key to his success was his skill for compromising and for bringing different groups together for the common good.

More summaries and resources for teaching or studying Clay, Henry.