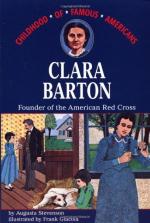 This encyclopedia article consists of approximately 1 page of information about Clara Barton.

"When there is no longer a soldier's arm to raise the Stars and Stripes above our Capital, may God give strength to mine."

Clara Barton. (Courtesy of the National Archives and Records Administration.)

Clara Barton is one of the most remarkable women in American history. A former schoolteacher, she never received any formal training in nursing. But she became a famous figure on Civil War battlefields, where she tended to thousands of sick and wounded soldiers and delivered huge quantities of medicine, food, and other provisions to Union troops. She also remained in the public spotlight after the war concluded. In 1881 she founded the American Red Cross, and in her later years she emerged as a leader...

More summaries and resources for teaching or studying Clara Barton.