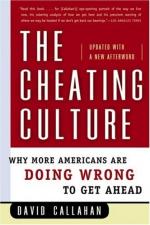 Cheating - Research Article from Encyclopedia of Childhood and Adolescence

This encyclopedia article consists of approximately 3 pages of information about Cheating.

Intentionally breaking the rules or achieving personal gain through fraud or deceit.

Cheating is defined as the intentional act of breaking the rules, or attempting to achieve personal gain through fraud or deceit. With children, cheating usually refers to academic fraud, such as copying answers from another student while taking an exam, or breaking the rules in a game.

Cheating as a concept is not understood by children until around age seven. Preschoolers often change the rules to a game as they play, innocent of the fact that rules must remain consistent to have any meaning. By seven, however, children have gained an understanding of rules, fairness, and honesty, and cheating then becomes intentional.

Children may cheat for a number of reasons. Some never develop a sense of guilt, so they have no internal inhibitors to breaking rules. If they will gain something by breaking a rule, they...

More summaries and resources for teaching or studying Cheating.

Cheating from Gale. ©2005-2006 Thomson Gale, a part of the Thomson Corporation. All rights reserved.