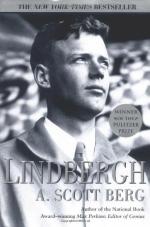 Charles Augustus Lindbergh - Research Article from Science and Its Times

A. Scott Berg
This encyclopedia article consists of approximately 3 pages of information about Charles Augustus Lindbergh.

He covered 3,600 miles (5,794 km) from New York to Paris in 33 hours and 30 minutes, an astonishing achievement for the time, and showed the possibilities of the airplane.

Charles Lindbergh grew up on a farm in Minnesota and was at the University of Wisconsin majoring in engineering when he became fascinated by flying machines. After two years, he quit to learn to fly. He became a barnstormer and traveled to fairs and air shows giving demonstrations of flying. Wanting more instruction, he attended Army Flying School in Texas and became a Second Lieutenant in the Army Air Service Reserve. Then he took a job with Robertson Aircraft in St. Louis. In 1926 he flew the inaugural flight of a new airmail route between St. Louis and...

Charles Augustus Lindbergh from Gale. ©2005-2006 Thomson Gale, a part of the Thomson Corporation. All rights reserved.