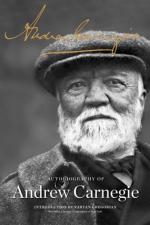 This encyclopedia article consists of approximately 11 pages of information about Carnegie, Andrew.

"Concentrate your energies, your thoughts and your capital. The wise man puts all his eggs in one basket and watches the basket."

Andrew Carnegie stands as a symbol of the idea that immigrants could come to the United States and make a vast fortune. In Carnegie's case, he came to the United States from his native Scotland at age thirteen and worked his way from poverty to one of the great fortunes of the world based on manufacturing steel. In retirement, Carnegie gave away several hundred million dollars, a significant portion of his fortune during his lifetime. He financed public libraries throughout the United States as well as donated money to universities and bought organs for churches.

In one respect, Carnegie shared an experience with...

More summaries and resources for teaching or studying Carnegie, Andrew.