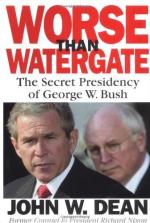 This encyclopedia article consists of approximately 3 pages of information about Bush, George W..

Born on July 6, 1946, in New Haven, Connecticut, George W. Bush graduated from Yale and had a successful business career before being elected governor of Texas in 1994 and reelected in 1998. In 2000 he was elected president with a majority of Electoral College votes but lost the popular vote to his opponent Al Gore.

The terrorist attacks of September 11, 2001, changed the course of the Bush presidency. As President Bush remarked in one speech, "in our grief and anger we have found our mission and our moment." President Bush made victory in the war on terrorism and the advance of human freedom the priorities of his administration.

On September 20, 2001, the president gave an address to a joint session of Congress in which he outlined the measures his administration would take to confront the threat of terrorism. Bush announced a series of initiatives...

Bush, George W. from Macmillan. Copyright © 2001-2006 by Macmillan Reference USA, an imprint of the Gale Group. All rights reserved.