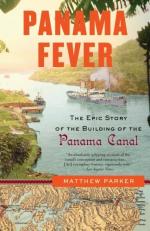 Building the Panama Canal - Research Article from Science and Its Times

This encyclopedia article consists of approximately 6 pages of information about Building the Panama Canal.

In the early years of oceanic commerce, ships carrying goods between Europe and the Far East had to travel a long, circuitous 12,000-mile (19,308 km) route around the continent of South America. As early as the 1500s, Spanish rulers first explored the idea of creating a canal through the Isthmus of Panama to drastically reduce travel time. In 1903, a treaty between Panama and the United States finally paved the way for the construction of the Panama Canal, a massive feat of engineering which not only united two oceans, the Atlantic and the Pacific, but opened an invaluable artery for international trade.

While the construction of the Panama Canal was not undertaken until the early twentieth century, it was first envisioned several centuries earlier. Christopher Columbus (1451-1506) searched in vain for a passage between the North American and South American Continents. In...

More summaries and resources for teaching or studying Building the Panama Canal.

Building the Panama Canal from Gale. ©2005-2006 Thomson Gale, a part of the Thomson Corporation. All rights reserved.