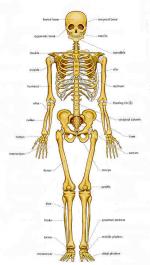 Bone Reabsorption - Research Article from World of Anatomy and Physiology

Bone reabsorption is a process whereby established bone is reabsorbed into its constituent parts. This process occurs throughout life, and is a normal part of growth and aging.

Osteoclasts are located in notches or indentations, called Howship's lacunae, that are found at the surface of bones. The cells themselves contain ATP producing bodies called mitochondria and lysosomes. The lysosomes can be thought of as bags. They contain enzymes, in particular an enzyme known as acid phosphatase, that acts to hydrolyze, or break down, the bone collagen. Osteoclasts also have a ruffled appearing border. It is believed that the ruffled border promotes interaction of the osteoclast with the bone, giving the collagen-dissolving acid phosphatase the time and contact exposure needed to act on the bone. The dissolution of the bone requires energy, which is supplied by the ATP produced by the mitochondria of the osteoclasts.

As humans grow, there is more bone formation than reabsorption—in other words more osteoblast activity than osteoclast activity--hence bones become bigger and stronger. Once growth has stopped, at around 25 years of age, there should be a balance of bone formation and reabsorption. However, over 40 years of age, the rate of reabsorption can become greater than the rate of bone formation. If this imbalance is pronounced, the bone mass in the body is reduced as the bones are eaten away, and bones can become brittle and break easily. This condition is called osteoporosis.

The trigger for the imbalance of osteoclast and osteoblast activities is not known. It is known that the loss of osteoblast activity is also coincident with a loss of calcium. Also, exercise, or rather the lack of it, is important, as if bones are not stressed, bone reabsorption increases.

More summaries and resources for teaching or studying Bone Reabsorption.

Bone Reabsorption from Gale. ©2005-2006 Thomson Gale, a part of the Thomson Corporation. All rights reserved.