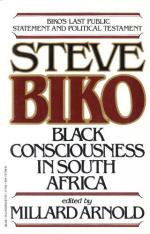 Biko, Stephen - Research Article from Governments of the World

This encyclopedia article consists of approximately 2 pages of information about Biko, Stephen.

A prominent anti-apartheid activist, Stephen Biko is known principally for his work in raising self-consciousness and pride among South African blacks. His tragic and brutal death in police custody in 1977 drew global attention and condemnation.

Born on December 18, 1946, in Kingwilliamstown, Biko won a scholarship to study medicine at the University of Natal in 1965. He quickly became active in the multiracial National Union of South African Students (NUSAS) that was composed of, and led primarily by, white liberal students who were strongly critical of the apartheid government. After attending a NUSAS conference at Rhodes University in 1968, where he was deeply offended by segregated sleeping and eating accommodations, Biko decided to break with NUSAS and form an all-black student union, the South African Students' Organization (SASO). He described his reasons for doing so as twofold. First, Biko found the proportionally small number of blacks in...

More summaries and resources for teaching or studying Biko, Stephen.

Biko, Stephen from Macmillan. Copyright © 2001-2006 by Macmillan Reference USA, an imprint of the Gale Group. All rights reserved.