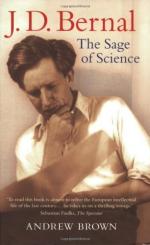 This encyclopedia article consists of approximately 4 pages of information about Bernal, J. D..

John Desmond Bernal (1907–1971), an eminent X-ray crystallographer and pioneer in the field of social studies of science and the movement for social responsibility in science, was born in Nenagh, County Tipperary, Ireland, on May 10, and died in London on September 15.

Following his education at Cambridge University, Bernal began his crystallography research at its Davy-Faraday Laboratory in London in 1923. After returning to Cambridge for a short period (1934–1937), he went to Birkbeck College, University of London, where he served as professor of physics (1937–1963), professor of crystallography (1963–1968), and professor emeritus (1968–1971). He initiated groundbreaking research on the crystals of sterols, proteins, and viruses and established the three-dimensional structures of nucleic acids, proteins, and viruses.

Bernal's work in molecular biology led to the conjecture that clays concentrated chemical compounds leading to the origins of life. He speculated in many directions and stimulated scientific research in many...

Bernal, J. D. from Macmillan. Copyright © 2001-2006 by Macmillan Reference USA, an imprint of the Gale Group. All rights reserved.