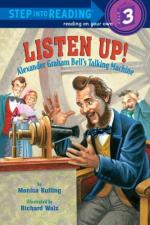 This encyclopedia article consists of approximately 4 pages of information about Bell, Alexander Graham.

Alexander Graham Bell, best known as the inventor of the telephone, was born in Edinburgh, Scotland, on March 3, 1847. When he died in Baddeck, Nova Scotia, Canada, on August 2, 1922, he was considered one of the most successful inventors of his time.

Bell's interest in communication was stimulated by unique family circumstances. Both his grandfather and father were accomplished speech experts. Many believe Bell's father was the inspiration for Professor Henry Higgins in the 1964 movie My Fair Lady. Having a hearing-impaired mother also made Bell conscious of the challenges of being deaf. In 1868 he began using his father's models of visible speech to teach deaf students phonetics, a career he resumed after emigrating with his family from Scotland to Brantford, Ontario, Canada, in 1870.

Onlookers watch with anticipation as Alexander Graham Bell tests out his new invention, the telephone.

The following year he moved to...

Bell, Alexander Graham from Macmillan. Copyright © 2001-2006 by Macmillan Reference USA, an imprint of the Gale Group. All rights reserved.