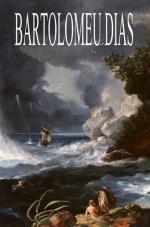 This encyclopedia article consists of approximately 4 pages of information about Bartolomeu Dias.

Bartolomeu Dias’s pioneering voyage around the southern tip of Africa, which came to be called the Cape of Good Hope, opened a sea route from Europe to India. This was an important advance for trade in the fifteenth century. Ironically, Dias himself perished in a storm off the Cape of Good Hope several years after he discovered it.

The voyages of explorer Diogo Cão in 1485 had taken Portuguese ships far down the western coast of Africa to Cape Cross, almost to the southern tip of the continent. King John II of Portugal, who was attempting to revive his country’s leadership in voyages of exploration, decided to send a new expedition to determine if it was possible to sail all the way around Africa. For commander of the voyage he...

More summaries and resources for teaching or studying Bartolomeu Dias.

Bartolomeu Dias from UXL. ©2005-2006 by U•X•L. U•X•L is an imprint of Thomson Gale, a division of Thomson Learning, Inc. All rights reserved.