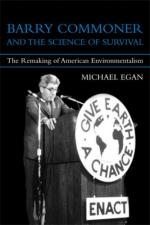 This encyclopedia article consists of approximately 9 pages of information about Barry Commoner.

Barry Cmmoner learned about environmental devastation first-hand as a lieutenant in the U.S. armed forces during World War II (1939–45), when he participated in the spraying of the Pacific Islands with DDT (a highly toxic chemical used to kill insect pests). Since that time he has used his scientific expertise to advocate policies that protect human health and the environment. He has campaigned against nuclear weapons testing, industrial pollution, and agricultural chemicals and has pushed for the use of renewable energy (such as solar power), organic farming, and recycling. Commoner consistently argues that scientists must educate the public about the destructive potential of technological advances and that humans must learn to live in harmony with nature.

More summaries and resources for teaching or studying Barry Commoner.

Barry Commoner from UXL. ©2005-2006 by U•X•L. U•X•L is an imprint of Thomson Gale, a division of Thomson Learning, Inc. All rights reserved.