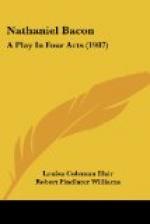 This encyclopedia article consists of approximately 7 pages of information about Bacon, Nathaniel.

"Gentlemen of your quality come very rarely into this country."

Nathaniel Bacon was a political leader and landowner in seventeenth-century Virginia who rose to prominence at a time when the colony was in turmoil. Wide divisions in social classes had produced a sense of unrest, especially among frontier farmers, who had little protection from Native Americans. The situation was brought to a crisis when the British governor, William Berkeley (see entry), adopted the Franchise Act of 1670. The law created an elite government by restricting the voting rights to a chosen few. Bacon became a popular leader when he supported farmers who felt left out of the governing process and needed protection from Native Americans who raided their farms. Bacon's Rebellion...

More summaries and resources for teaching or studying Bacon, Nathaniel.