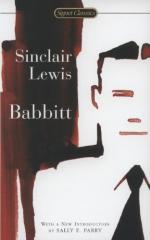 Babbitt - Research Article from Literature and Its Times

Sinclair Lewis
This encyclopedia article consists of approximately 12 pages of information about Babbitt.

Born and raised in Sauk Centre, Minnesota, Harold Sinclair Lewis (1885-195 1) suffered a relatively awkward childhood. His mother died when "Harry" was five, and the orange- haired, gangly youth was less popular than his older brothers, remaining something of an outsider both at his hometown school and at Yale. His first novel, Our Mr. Wren, appeared six years after he received his Yale degree in 1908, and was followed by his best-known works, which were written during and about the rapidly changing America of the 1920s. The success of Main Street (1920), a novel that depicted the ways of a little midwestern town rather like Sauk Centre, earned him widespread acclaim. Babbitt, his next effort, succeeded even more impressively; largely on its strength, Lewis became the first American to win the Nobel Prize in Literature, in 1930.

Babbitt from Gale. ©2008 Thomson Gale, a part of the Thomson Corporation. All rights reserved.