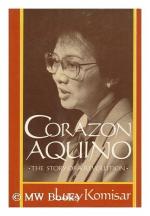 Aquino, Corazon - Research Article from Governments of the World

This encyclopedia article consists of approximately 3 pages of information about Aquino, Corazon.

Maria Corazon Cojuangco Aquino (b. 1933) was the first female president of the Republic of the Philippines. Better known simply as Cory, she was responsible for galvanizing political opposition to the dictatorial rule of Ferdinand Marcos (1917–1989). She gained renown as one of the cardinal leaders of the 1986 "People Power Revolution": a nonviolent civilian-military uprising that overthrew the authoritarian regime. Her courageous stance and moral leadership also led to the rise of women leaders in Southeast Asia and the rest of the world.

Aquino was born on January 25, 1933; her parents hailed from two of the richest and most politically powerful families in the Philippines: the Sumulongs and the Cojuangcos. She belonged to the clans that controlled the largest agricultural properties in the provinces of Tarlac and Rizal. Her father was a congressman and both her grandfathers had served as senators.

More summaries and resources for teaching or studying Aquino, Corazon.

Aquino, Corazon from Macmillan. Copyright © 2001-2006 by Macmillan Reference USA, an imprint of the Gale Group. All rights reserved.