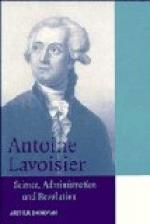 Antoine Laurent Lavoisier - Research Article from Science and Its Times

This encyclopedia article consists of approximately 3 pages of information about Antoine Laurent Lavoisier.

Antoine Lavoisier is regarded as the founder of modern chemistry. Although he made few discoveries of new substances or processes, his work in chemical theory provided a synthesis of the discoveries of his contemporaries and a framework upon which subsequent work could be based. He is perhaps best known for his discovery of the role that oxygen plays in combustion, his statement of the conservation of matter in chemical reactions, his clarification of the difference between elements and compounds (molecules), and his part in the development of the modern system of chemical nomenclature.

The son of a prosperous lawyer, Lavoisier was educated at the College Mazarin, where he began his scientific studies after initially studying law. His early scientific publications led to his election to the Royal Academy of Sciences in 1768, at age 25. His father bought a title of...

Antoine Laurent Lavoisier from Gale. ©2005-2006 Thomson Gale, a part of the Thomson Corporation. All rights reserved.