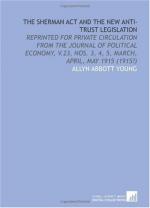 This encyclopedia article consists of approximately 12 pages of information about Antitrust Political Cartoons.

"A Trust Giant's Point of View"

Originally published in The Verdict (January 22, 1900)

In the latter part of the Gilded Age (the era of industrialization from the early 1860s to the turn of the century in which a few wealthy individuals gained tremendous power and influence), a growing number of the American population became alarmed about the increasing power of big business. Of particular concern were the giant trusts, which were groups of companies within an industry that joined together under one board of directors—called trustees—in order to reduce competition and control prices. As the trusts got bigger and stronger, they were able to buy out more and more of their competition, and the wealth became concentrated in just a few huge corporations, especially in transportation and...

Antitrust Political Cartoons from UXL. ©2005-2006 by U•X•L. U•X•L is an imprint of Thomson Gale, a division of Thomson Learning, Inc. All rights reserved.