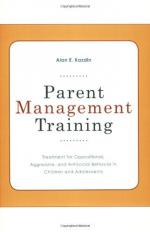 This encyclopedia article consists of approximately 2 pages of information about Antisocial Personality Disorder.

A behavior disorder developed by a small percentage of children with conduct disorder whose behavior does not improve as they mature. Also known as sociopathy or psychopathy.

The adult with antisocial personality disorder displays at least three of the following behaviors:

Is deceitful and manipulative of others, often...

Antisocial Personality Disorder from Gale. ©2005-2006 Thomson Gale, a part of the Thomson Corporation. All rights reserved.