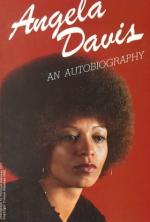 This encyclopedia article consists of approximately 9 pages of information about Angela Davis.

Angela Davis grew up on Birmingham’s (Alabama) “dynamite hill”—an African American neighborhood named because of the frequent bombings there by white supremacists. Davis’s exposure to racism in her youth led to her involvement in antiracist causes as she grew older. After going to college in Massachusetts and abroad, she moved to the U.S. West Coast and became involved in civil rights and black-power organizations and the Communist Party.

In 1970 Davis was charged with conspiracy relating to a courtroom shooting incident. She fled from the law and was placed on the FBI’s Ten Most Wanted list. After her capture Davis spent one and one-half years in jail awaiting trial. She was eventually cleared of all charges. Today Davis is a professor of the history of...

More summaries and resources for teaching or studying Angela Davis.