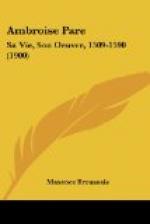 Ambroise Paré - Research Article from Science and Its Times

This encyclopedia article consists of approximately 3 pages of information about Ambroise Par&#xe9;.

Ambroise Paré inaugurated modern military surgery and was the greatest military surgeon before Dominique Jean Larrey (1766-1842). He invented or introduced many surgical instruments and popularized the use of trusses, ligatures, artificial limbs, and dental implantations. His Oeuvres were first published in 1575 and had gone into five editions by 1598.

The son of an artisan in Laval, France, Paré served as apprentice to a barber-surgeon then studied surgery at the Hôtel Dieu hospital in Paris. He became a master barber-surgeon in 1536 and joined the army the same year.

In 1536 King François I made war on the Duke of Savoy and besieged Turin, Italy. Paré was a surgeon with the French army. Until this time, the standard surgical procedure for arrow, bullet, and similar puncture wounds was to cauterize them with hot oil. European doctors had used this ancient Arabic technique...

More summaries and resources for teaching or studying Ambroise Par.

Ambroise Paré from Gale. ©2005-2006 Thomson Gale, a part of the Thomson Corporation. All rights reserved.