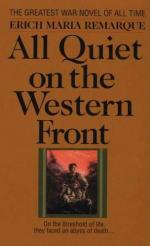 Erich Maria Remarque
This encyclopedia article consists of approximately 12 pages of information about All Quiet on the Western Front.

Erich Maria Remarque, the son of a bookbinder, was born in Germany in 1898. A bright and perceptive student with strong interests in music, art, and literature, Remarque decided to pursue a teaching career. But in 1916, before he could complete his training, Remarque was drafted into the German army along with other fellow students. He served in a sapper unit, which was responsible for fortifying positions behind the front, until he was wounded by an artillery attack in July 1917. His experiences at the front and the antiwar sentiment that they produced in him form the central core of his most famous novel, All Quiet on the Western Front.

The outbreak of war. In reaction to Austria's harsh attempts to control Serbian commerce, on June 28, 1914, Archduke...

All Quiet on the Western Front from Gale. ©2008 Thomson Gale, a part of the Thomson Corporation. All rights reserved.