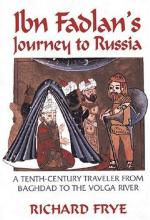 This encyclopedia article consists of approximately 4 pages of information about Ahmad Ibn Fadlan.

Ahmad Ibn Fadlan lived near the city of Baghdad (in what is now Iraq) during the early 900s. Although not an Arab himself, Ibn Fadlan was an Islamic scholar, and he served the caliph (the Islamic ruler) of the city, which was a center of commercial and religious importance. In 921–22 Ibn Fadlan was the religious advisor of a diplomatic mission sent by the Abbasid Caliph al-Muktadir to the king of the Volga Bulgars, a Turkish tribe then living on the east bank of the Volga River, in what is now Russia. One of the purposes of the journey was to explain the laws of Islam to the Bulgars, who had recently converted to the religion. Ibn Fadlan would later write the only account of this trip to the north, describing the peoples he encountered and their extraordinary beliefs and customs.