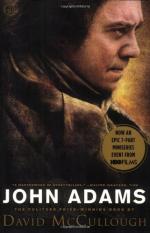 In the years between his birth in 1735 and death in 1826 John Adams became a member of an elite group of men who became universally praised as America's Founding Fathers—a title he richly deserved. And while Jefferson may have had a more subtle intellect, Franklin more popular appeal and Washington more stature, few could argue that any one person did more for the cause of American independence than John Adams. In addition to this contribution, he personified the ideals of republican virtue that have left a lasting imprint on American society, culture and identity.

John Adams came from humble origins. Unlike Washington and Jefferson who came from wealth and had amassed vast land holdings by the time of the Revolutionary War, Adams was born into a more simple life. His father was a farmer...

More summaries and resources for teaching or studying Adams, John.

Adams, John from Macmillan. Copyright © 2001-2006 by Macmillan Reference USA, an imprint of the Gale Group. All rights reserved.