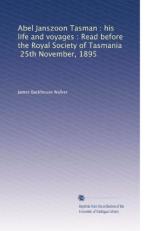 This encyclopedia article consists of approximately 4 pages of information about Abel Tasman.

As a navigator for the Dutch East India Company, Abel Janszoon Tasman made his most famous voyage to the South Pacific, where he became the first European to discover Tasmania, New Zealand, Tonga, and the Fiji Islands. Tasman was born in a small village in the Dutch province of Groningen in 1603. He went to the Dutch East Indies for the first time in 1633, then spent the next ten years sailing the ships of the East India Company on some of the most lucrative trade routes in the world. He traveled from Holland to Batavia, the capital of the East Indies, now known as Djakarta, and called at ports in Taiwan and Formosa in China; he also visited the Philippines, Japan, and Cambodia. Tasman accompanied an expedition searching for islands reputed to be rich in silver and gold along the east...

More summaries and resources for teaching or studying Abel Tasman.