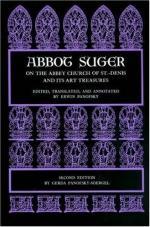 Abbot Suger of St.-Denis - Research Article from Science and Its Times

This encyclopedia article consists of approximately 3 pages of information about Abbot Suger of St.-Denis.

Suger, through his promotion of the redesign and reconstruction of the Abbey Church of St. Denis, near Paris, France, is regarded as the originator of gothic architecture. He also had great effect on the ideology of church decoration, was close advisor to two kings, and served for two years as regent of France.

The son of Helinand, a minor French knight, Suger was born north of Paris in the general vicinity of St.-Denis. When he was about ten, his family gave him as an oblate to the Benedictine Abbey of St.-Denis, the royal church of the patron saint of France. For the next ten years he lived in a tiny cell at L'Estrée while he completed his theological, liturgical, legal, and Latin education. Early in the twelfth century he studied...

More summaries and resources for teaching or studying Abbot Suger of St.-Denis.

Abbot Suger of St.-Denis from Gale. ©2005-2006 Thomson Gale, a part of the Thomson Corporation. All rights reserved.