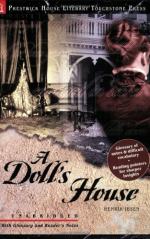 A Doll's House - Research Article from Literature and Its Times

Henrik Ibsen
This encyclopedia article consists of approximately 12 pages of information about A Doll's House.

Henrik Ibsen was born on March 20, 1828, in the small town of Skien, Norway. In an effort to escape small-town life and his family's poverty, he later moved to the city of Christiana and began a modest career in journalism and the theater. He was repeatedly denied a writer's stipend because of the way he satirized both the public and the authorities in his writings. Ibsen went into voluntary exile from 1864 to 1891, but even in his absence, his reputation in Norway grew. With the appearance of A Doll's House, his fame spread beyond Scandinavia to the rest of Europe and the world.

Norway in the nineteenth century. Norway was troubled by its share of foreign policy crises and domestic concerns throughout the 1800s. The century had started well enough. Norway was one of...

A Doll's House from Gale. ©2008 Thomson Gale, a part of the Thomson Corporation. All rights reserved.