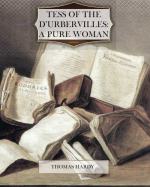 Tess of the d'Urbervilles Notes

Tess of the d'Urbervilles Notes & Analysis

The free Tess of the d'Urbervilles notes include comprehensive information and analysis to help you understand the book. These free notes consist of about 56 pages (16,783 words) and contain the following sections:

These free notes also contain Quotes and Themes & Topics on Tess of the d'Urbervilles by Thomas Hardy.

Tess of the d'Urbervilles Plot Summary

Tess is a girl of the working class with a family that hates to work, so when they learn that her father is the descendant of the noble family, the d'Urbervilles, they send Tess to a rich "relative" in nearby Tantridge to get money or marry well so that her parents will be taken care of. Tess goes because her parents make her feel she must although she thinks it's wrong of them to ask for money. This meeting with Alec d'Urberville, one of the "relatives" seals her dreadful fate. He is attracted to Tess and takes advantage of her when she comes to Tantridge to work at d'Urberville manor and she returns home ruined. Alec promises to take care of her if she ever needs anything, but she dislikes him so much that she'd rather suffer than have any contact with him.

Soon Tess bears a child she names, Sorrow, and the child dies only days after it is born. Tess, without the support of her shiftless family, leaves home to try at independence again knowing now to be wary of men. She goes to Talbothay's dairy and falls in love with Angel Clare, the son of a pastor who is learning about farming at the dairy. Although she thinks herself unworthy of such a sweet man because of what happened to her, Tess and Angel fall in love and decide to get married. She refused his proposals for quite a while trying to find a way to tell him about her past with Alec d'Urberville, but she couldn't do it. It is important to her that he knows everything about her so that she knows he loves her for herself and not for who he thinks she is, so shortly before they are supposed to be married, she writes him a letter and slips it under the door of his room. He never gets the letter because it is stuck under the edge of the carpet. Tess realizes this mistake on the morning of their marriage, and she is not given an opportunity to tell him before they are married.

That night he confesses that he's had one sexual encounter that he couldn't bring himself to tell her about and she forgives him, knowing that he'll forgive her what happened with Alec. But when she tells Angel about it, the way he feels about her changes completely. He feels betrayed and tricked, so they agree to separate, although Tess loves him greatly.

He goes to Brazil to try his hand at farming there, and Tess works at hard job after hard job rather than asking his family for money as he'd instructed her when he left. While she's working herself to the bone, she encounters Alec d'Urberville again and he begins visiting her, relentlessly trying to convince her to marry him. She finally gives in when her family is evicted from their home after her father's death and they have nowhere to go. Alec provides them a home, and Tess agrees to be his wife.

Angel then returns from Brazil and comes to find her, knowing that he has treated her unfairly. When he finds her, she is distraught that the only man she ever loved has come back, and once again, Alec d'Urberville is standing in her way. She stabs Alec with a carving knife, and she and Angel spend a week together hiding out and being as they were before they were married. Then Tess is captured and executed, and Angel marries her younger sister, Liza Lu. After she met Alec d'Urberville, there was nothing Tess could do to change fate. All that happened to her was meant to be.

Tess of the d'Urbervilles from BookRags. (c)2022 BookRags, Inc. All rights reserved.