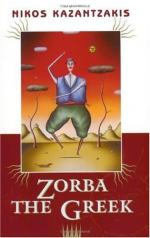 Nikos Kazantzakis
This set of Lesson Plans consists of approximately 156 pages of tests, essay questions, lessons, and other teaching materials.

• Bring in newspaper or Internet articles with contemporary tellings of some action in Zorba the Greek. These could be mining stories, honor killing stories, stories of returning to one's ancestral land, etc.

• Present to the class.

Paint your own version of the painting of Madame Hortense that Zorba presents her with.

With old clothes, dress up in a costume you think Zorba might wear.

• In groups of 3 or 4, reenact a short portion of Zorba the Greek.

• Use dialogue from the book and create more where necessary.

Watch the film adaptation of Zorba the Greek and give a short presentation of it to the class.

• Do some research on the mining of lignite.

• Determine how it is symbolically different from the mining of peat or coal.

• Give a brief presentation to the class.

• Diagram a series of pictures detailing the formation of lignite.

• Don't use words in the diagrams.

• With several classmates, dress up in costumes to appear like characters from Zorba the Greek.

• Create still photos of the group acting out scenes from the book.

• Bring something small from home.

• Using clay, make a small statue of something with the item embedded inside.

• Decide whether you would be able to leave the thing inside forever or if you would want to destroy it for the item.

Write one scene form a play about the widow's life when she was previously married.

Create a shoebox scene using miniatures and other found objects to recreate the scene in the cafe when the narrator first meets the widow.

Write a love/breakup poem from the narrator to the Buddha.

Make a sculpture of the Buddha.

With a small group of classmates, create and record a reenactment of your interpretation of the moment when the Buddha is exorcised from the narrator. Show to class.

Write a one-page short story in which Zorba decides to become a Buddhist.

Using charcoal, create a picture of the moment when the narrator successfully exorcises the Buddha.

Using a musical instrument, make up a song without words that expresses the looting scene at Hortense's home after she dies.

Write a one-page short story in which you describe what happens to the beautiful green stone in Germany after the end of the novel.

Make up your own festival. Detail all of the rituals involved. Describe why it is an important festival.

More summaries and resources for teaching or studying Zorba the Greek.