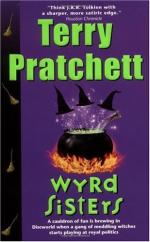 Terry Pratchett
This set of Lesson Plans consists of approximately 122 pages of tests, essay questions, lessons, and other teaching materials.

1. Describe Discworld and tell how it derives its magic.

Flat as a disc, Discworld sits upon the shoulders of four elephants, which in turn sit upon the back of A'tuin, the great turtle. The turning of the disc generates magic for the world.

2. Who can see King Verence after he becomes a ghost? Who offers him the explanation?

The grim reaper appears to the late King Verence, explaining that Verence is due to remain as a ghost for an indeterminate amount of time, adding that only psychics, close relatives, and cats will be able to see Verence from now on.

3. How do the witches acquire a baby?

The witches are meeting when they are interrupted by the arrival of the coach. A man emerges, living just long enough to thrust a bundled baby into Granny Weatherwax's arms. He then falls dead to a crossbow bolt in the back.