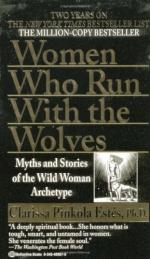 Women Who Run with the Wolves Test | Mid-Book Test - Hard

1. What rots away after the Skeleton Woman is killed or brutally injured, depending on the version of the story?

2. The author talks about how she and a female friend celebrated and healed themselves with a/an _____________ production.

3. What happens after the Skeleton Woman is destroyed by the monster in her life?

4. The child hopes that her __________ will help to transform the stepmother and her stepsisters into kinder beings.

5. Estes argues the possibility for the body to be a great storehouse of ____________, rather than being opposed to the spiritual.

1. What happens after the duckling decides to run away from his family? How is he saved?

2. Why do the Taoists call women the gateway, according to the author's writing in this section of the book?

3. What are some of the ways in which Estes believes that women's bodies have been attacked?

4. How does the duckling come to find out that he is actually a swan rather than being like his brothers and sisters?

5. What is wrong with the shoes that the girl receives later on in the story?

6. What do the others do when it's clear that one of the eggs in a bunch is not the same as the others?

7. What is the problem with the dog in the story of the man who wants to marry the twin daughters?

8. What happened between the father of the Skeleton Woman and the women herself?

9. What happens to the Skeleton Woman as she is being dragged behind the boat of the fisherman?

10. What does Estes suggest about the female body and what it might be capable of doing?

The birthmark on the man shows others that he is strange or somehow different from them.

Part 1: Why do you think that people were once afraid of birthmarks on a person?

Part 2: Do you think it's normal to be afraid of the appearance of someone else?

Part 3: How do you think you would react if you met a person with a large birthmark or different skin coloring? Why?

It's no surprise that the author delves into the discussion of women's bodies and how they have been attacked.

Part 1: How do you think women's bodies are attacked in this world?

Part 2: Do you think there will ever come a time when women's bodies are not being attacked in some way? Why or why not?

The many challenges that Vasilisa has to encounter serve to make her stronger and to help her defeat the evil women in her life.

Part 1: Why do you think that Baba Yaga gave Vasilisa all of those challenges?

Part 2: Do you think that Baba Yaga knew Vasilisa had the doll with her? Why or why not?

Part 3: Do you think that Baba Yaga wanted to hurt Vasilisa? Why or why not?