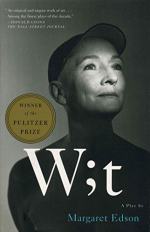 Margaret Edson
This set of Lesson Plans consists of approximately 111 pages of tests, essay questions, lessons, and other teaching materials.

Write Vivian's obituary the way you think she would have written it.

Death Be Not Proud

Write a sonnet about Vivian.

Choose one of Vivian's monologues. Present your dramatic interpretation of the monologue.

Write a scene in which Vivian's father is introduced to Professor Ashford.

Design the theater and stage in which Wit might be performed.

Wit on the Big Screen

Write a synopsis of the film adaptation of Wit.

Write Vivian's last will and testament.

Restructure Wit into acts and scenes as a traditional play. Indicate where the act and scene breaks occur, and why.

The Music of Wit

Create a soundtrack for Wit.

Write a list of titles you imagine would be on Vivian's bookshelf at home. Why do...

More summaries and resources for teaching or studying Wit.