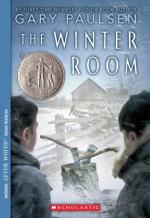 Gary Paulsen
This set of Lesson Plans consists of approximately 124 pages of tests, essay questions, lessons, and other teaching materials.

1. What are some of the smells Eldon describes in the opening chapter called "Tuning?"

Eldon talks about the smells of the farm. He mentions the smell of hay that has just been cut and of the hay in the loft of the barn, waiting to be thrown to the animals. He also talks about the smell associated with the birth of a calf and of manure. He says that if this book could have smells, the reader would detect the scent of new potatoes cooking and the odor of the slop bucket when the lid is removed in order to throw in the potato peels.

2. What are some of the sounds Elden describes in the opening chapter?

More summaries and resources for teaching or studying The Winter Room.