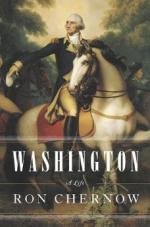 1. What was the name of the farm inherited by Washington's eldest half-brother?

2. When did Washington inherit Mount Vernon?

5. Who was George Washington's father?

1. How did the lack of a formal education impact Washington's feelings about himself throughout his life?

2. How was Washington's slave population impacted when he married Martha and how did he view himself as a slave owner?

3. What happened to raise morale among Washington's troops as they struggled to hold New York?

4. What caused Washington to ultimately support a boycott of British goods?

5. Who were George Washington's parents and how many siblings did he have?

6. What was Washington's pattern of wins and defeats in the early stages of the war?

7. Why was the Revolutionary War important for Washington?

8. What financial responsibility did Washington have for his stepchildren for the rest of his life?

9. What impact did Washington's father's death have on his life?

10. How did destiny play a part in Washington's decision to join the army instead of the navy?