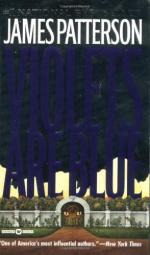 James Patterson
This set of Lesson Plans consists of approximately 86 pages of tests, essay questions, lessons, and other teaching materials.

1. How are Cross and the dinner guest connected?

2. Where do William and Michael go after they leave California?

3. Where does Cross go after leads dry up?

4. Cross heads to the next crime scene in which state?

5. How is the second person killed?

3. Why did the brothers stop in Savannah? What was their opinion of the city?

4. What are some of the reasons that becoming an FBI agent seems appealing to Cross? How would leaving the Metro police department affect Cross?

5. What prompted William and Michael's love of extreme sports? Why are the sports so appealing?

6. Why aren't the killers interested in money or material possessions? Why do the vampires always leave money and jewelery behind after killing a victim?

7. Why does the Mastermind keep leaving clues for Cross?

8. Who is Irwin Snyder? Why is he important to the story?

9. Why do William and Michael decide not to go after Cross and Craig? Were the brothers' assumptions correct?

10. Why does Cross think that becoming involved with Jamilla could be dangerous? How does Jamilla react to Cross' distance?

Cross had to face Craig one more time at Kate McTiernan's house. How did the confrontation change Cross? Do you think Kyle Craig will be put in prison for life? How will the absence of the Mastermind affect Cross' future cases?

John Sampson typically plays an integral role in the Alex Cross series. However, in "Violets are Blue," Sampson has a supporting, albeit important, role. Why is Sampson's role in the story important? How might the story have changed if Sampson had not been involved?

During the fetish ball, two vampire princes are murdered before they can be crowned. What was the purpose of the murders? Were the victims part of the plan or were their deaths borne of opportunity?